Skip to content
Photo by @Nicholas Motto (via Canva) 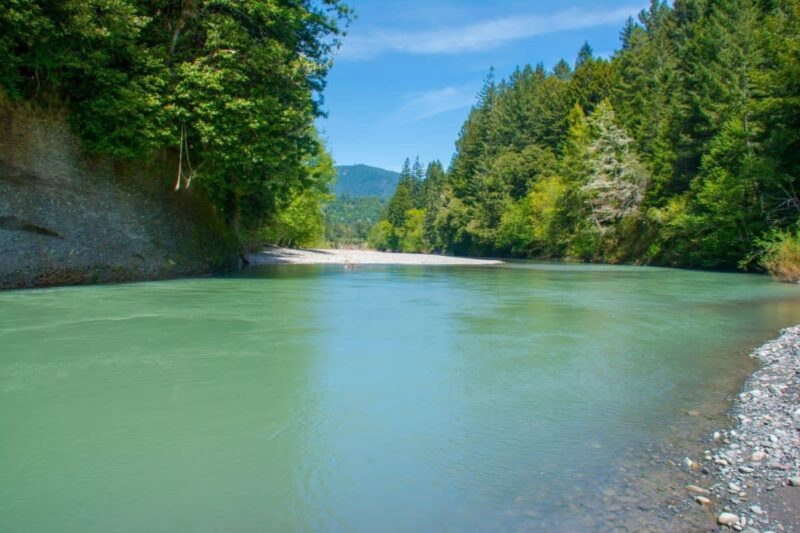 Hit it right, and the Van Duzen River on the Northern California coastline is home to great steelhead fishing.

The small stream is a tributary of the better-known Eel River. More importantly to anglers, it’s planted with hatchery steelhead smolts that can return to the river in good numbers during the winter season.

There are some great holes throughout the roughly 25-mile stretch from Bridgeville downstream to the confluence with the Eel River.

That confluence is located just west of Highway 101 between Fortuna and Rio Dell, 22 highway miles south of Eureka.

Beautiful redwood and fir forests surround the river and give the area an ancient feel of quiet solitude.

However, the steelhead you pull from the river are far from quiet. Eager to crush a salmon egg imitator on a fly rod or smash a Corky on a salmon rod, the steelies here are aggressive and ready for a fight.

Chinook and coho salmon make annual visits as they swim upstream to spawn. They not only look awesome swimming through the shallower riffle sections, but they might also snatch your steelhead bait and put up a struggle.

However, at last check salmon are off-limits here so make sure you release them unharmed. It’s always wise to check the current regulations before fishing.

One thing to keep in mind about the Van Duzen is the erosion rate. It is one of the highest rates of any river in the nation, so it can get cloudy.

Imagine your 1,001st cast while targeting steelhead with no luck.

You know they are holding in the pools and runs that you keep dragging baits and lures through, so why aren’t they biting? Steelhead, also known as the fish of 1,000 casts, had better snap up your offering by then, right?

On the Van Duzen River, thankfully, your wait is usually much shorter. However, shorter doesn’t mean always catching.

During the right times of the year, when the runs are good and river conditions cooperate, steelies are likely slamming lures at a pretty good clip. Still, it might take a several casts, several hundred, or even more to hook one of these elusive fish.

Some winter steelhead may trickle in for the holidays, but your odds are generally best beginning in January and you have a legitimate shot at catching steelhead through the end of March, when the season ends.

There are some summer steelhead that also make their way into the Van Duzen, and the weather at that time can be gorgeous, but the numbers at that time of year are fairly modest.

Each year, as the steelhead have returned to the Van Duzen, the numbers fluctuated wildly. This is true across the West Coast, due to both natural cycles and human activities.

Reclamation projects up the Van Duzen and the Eel River watershed as a whole have been having a positive impact on the number of returning fish, but a variety of factors make projecting the run numbers a moving target.

Improving the quality of the river and tributaries has been a boon for the returning steelies, meaning they are starting to show in more significant numbers.

Numbers have rebounded markedly, with over 10,000 being counted each year. That’s a significant improvement from the 300-500 numbers of a few years back.

The addition of hatchery-reared steelhead smelt have gone to help the system rebound and keeps us catching good numbers throughout the winter, which is why this river gets a nod on our Best Steelhead Fishing Rivers in California.

Start your trip for steelhead at the confluence with the Eel and move your way upriver to target as many holes as possible. If the fish have been in the river for some weeks, starting farther upriver could be your ticket.

Once the fish have moved into the Van Duzen, they often hold in pools or other spots out of the main current before tackling the faster rapids upriver.

If you’re floating the river, try launching your drift boat at Fisher Road just outside of Carlotta if water levels allow.

Pink Corkies with pink hooks tipped with a worm work almost like steelhead crack, so give that a try.

Note that bait is allowed from October to March, which includes the prime winter steelhead season, and that barbless hooks are the rule throughout the open season. There’s a full fishing closure in April and much of May. Check the regs for specifics.

The middle portion of the river has some great pools along the Chalk Bluffs. When steelies are in the river in number, they almost certainly will be here.

This spot is perfect for fly fishing and can be accessed by hiking through the redwoods on the north shore. You might encounter an occasional group of people swimming through this area in warmer months, if you’re searching for those more elusive summer steelhead.

From Grizzly State Park and upriver are some of the best pools and deep holes on the river.

From Grizzly upstream to the next bridge, you’ll find Goat Rock. The downstream side is possibly the best fishing hole on the entire river. The number of fellow anglers stacked up around it can attest to that.

Take care if fishing from shore. There are some holes along the river that don’t look as deep as they are.

Upriver from Goat Rock is a deep, almost impossible-to-access canyon. There are a few trails you can hike down to the river, though they aren’t for the faint of heart or weak of knees. Steep canyon walls make the hikes pretty grueling.

Above the canyon, there are a few more fishable holes that are worth checking out. Once you reach Bridgeville, you’re at the end of the legal fishing portion of the river.

The usual techniques for steelhead work great along the Van Duzen. Check out the California regulations before hitting the river because regulations change often.

Chinook and coho make small runs up the Van Duzen River every year.

Definitely check the regulations for any changes, but as of last look, there is no fishing allowed for them as efforts to rebuild runs continue.

Things can change quickly in California, so there may be catchable numbers of Chinook at some point, possibly more so on the nearby Eel.

The Van Duzen has a sustainable level of rainbow and brook trout in its upper sections.

Where allowed, fishing for these eager biters can be epic. If you’re not after size and are looking to hone your skills with a fly rod, this is the place.

Think hoppers in the late summer and early fall as an indicator above a nymph of some sort, and you’re going to be on fire.

There are modest shad runs every spring that are fun to target, though the majority of those fish stay in the Eel and the South Fork of the Eel. Some run up the Van Duzen and can be a lot of fun when caught.

Sacramento pikeminnows were planted in Lake Pillsbury years ago and by some accounts had a negative impact on the overall watershed.

They’ve been chiefly confined to deeper pools because it turns out river otters find them to be a tasty snack.

Green sunfish have been introduced to a few creeks and will likely grow in numbers. Luckily, they don’t do as well in swift currents, so in high water years, they get swept out to sea.

Bullhead catfish have been showing up more and more in the Eel and Van Duzen. They have established a small population, though being the prolific spawners they are, they may expand that hold.

Check regulations to see what to do with pikeminnows, sunfish, and bullhead if caught.

Located about 20 miles from Eureka, the Van Duzen River is remote for the majority of Californians. It does have a few small communities on its banks, though getting here from any major population area is going to take a commitment.

For example, it takes roughly three and a half hours to go from Redding to the Van Duzen and a good four hours or more from the San Francisco Bay Area.

One thing to remember is that the drive is breathtaking, and once you arrive at your new favorite part of the steelhead world, you won’t want to go home again (until the cold gets into your bones, that is).

Boat access is entirely dependent on the level of the river. A high enough flow will allow you to launch at several spots on the lower and middle river. The upper isn’t as boat-friendly.

Shore access on the upper is perfect for getting close up with the pools in the river. There are possible sections to wade through the entire canyon section if levels are low enough. It’s a bit of a hike but worth it to reach the natural pools.

The Van Duzen is a great tributary to focus on while fishing the Eel River system or just north on Mad River, both also some of the better steelhead fishing rivers in this region.

There are several places along the Eel to stay, with campgrounds and RV parks featured prominently.

The area has restaurants and cafes, shops, stores and markets to get whatever you might have left at home. Sporting goods stores are around as well.

Spend some time on the Van Duzen, and you’ll find it to be worth the cost of the trip.

The Best Fishing in America

Best Fishing in America is your virtual guide to fishing across the United States. Our writing team of avid anglers shows you where and how to catch everything from gigantic largemouth bass in the reservoirs of Southern California to wild trout in the backwoods of New England, from northern pike through a hole in the ice in Minnesota’s lakes to redfish tailing in the shallows of the Gulf of Mexico.